The next meeting of the Oxford City Fair Trade Coalition will be on the 14th January 2011 at 5pm at Oxford Town Hall.

You can find a copy of the agenda here. 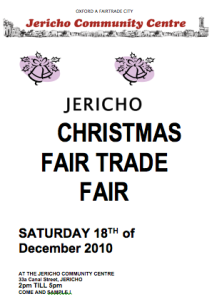 LOCAL PRODUCERS JOIN FAIRTRADERS FROM AROUND THE WORLD at the Jericho community centre with shawls, jumpers, hats, gloves and scarves from Peru and Bolivia, silk scarves and pashminas from Bangladesh and India, jewellery from Africa coffee from Nicaragua, organic fresh vegetables from Oxfordshire.

Fairly traded or local and organic goods from far and near will be on sale on Saturday 18 th December at the Jericho Community Centre, 33a Canal Street from 2 noon until 5 pm.

As Susan Pead the administrator of the Oxford Jericho Association says, “Jericho is happy to hold this annual event and support the efforts of Oxford status as a Fair Trade city”. She added, “I am delighted that Jericho, with its strong tradition of community spirit, was one of the first centers to host a Fair Trade Christmas fair on behalf of all residents in Oxford.”

This is the seventh year running that we have organised a Fair Trade, Local and Organic Christmas Fair. Last year it was a great success, attracting lots of people from all over Oxford. There will be a raffle with the chance to win some organic produce and many other surprise prizes, with the proceeds being donated to the Gatehouse, a local charity that provides hot soup, sandwiches, tea and coffee to homeless people over the winter months.

Oxford became a Fair Trade city in March 2004, an important milestone in the growth of the Fair Trade movement, which has rapidly expanded in the last 6 years all over Europe. There will be stalls with quality products from Africa (Exclusive Roots) Asia and Latin America, mainly from members of the WFTO World Fair Trade Organisation http://www.wfto.com

You can find a poster to download to help promote the event here.