An invitation to walk the Fair Trade Way

From 24-29 August 2012 the Garstang Fairtrade group is organising a walk along the Fair Trade Way – an 80 mile trail through beautiful countryside from Garstang (the world’s first Fairtrade Town) to Keswick.   They invite you to join them for all or part of it. Leading the walk will be fair trade pioneer and Chair of the Garstang group, Bruce Crowther, and climate justice campaigner, Pushpanath Krishnamurthy (known to his friends as Push). Push has already walked  from the UK to the climate summit in Copenhagen in 2009 (550km over 23 days) and Last year he walked  540km from from Baba Budangir in Chikamagalur district of India (the birth place of coffee in the Western Ghats) to Mysore in Karnataka and connected with over 30,000 people on the way; the majority of whom were small-scale farmers whose livelihoods are jeopardised by climate change.  Both have long connections with Oxfam. Oxfam’s Nicola Sansom has written this blog about it.

The next OFTC meeting will be held on 11th June at 18.30 at Fairtrade at St Michael’s.

We will try to keep the meeting short, lively and relevant and would really welcome your input as we look forward to the future and think about how we can make the most of our coalition to increase our own understanding of fair trade and to promote fair trade in Oxford and beyond – so do please try to make it.

To fuel the creative process, fairly traded nibbles will be provided.

The meeting is open to anyone in Oxford who is involved in, or interested in fair trade. We warmly welcome newcomers!

Please email yourfairtradecity@gmail.com if you would like further information – or just turn up.

Minutes of the AGM of the Oxford Fair Trade Coalition

The report was read out in summary since most had already read it on the website where it remains accessible on http://www.oxfairtrade.org.uk. The following points were highlighted. It had been an unusually full and active year for the coalition and one that had generated more income than usual to work with. This income had come firstly from the European cities Millennium Development Goal programme of seminars. For the first of these Oxford provided the location and the Fairtrade theme and the speakers all kindly donated their fees to the coalition. Then Tim Davies generated further income from his development of a Fairtrade Finder web and mobile phone application. This unexpected wealth made it possible to pay for consultancy work to help with organising the city Fairtrade status renewal as well as for some initiatives during Fairtrade Fortnight, including publication of the much admired Oxford Fairtrade News. There were no comparable sources of income anticipated in the coming year and we needed to think about what the coalition should or could try to achieve and how it should be structured to meet the “Challenges and Opportunities” identified for the future. However, with so many key people not present, this debate should be left until the next regular coalition meeting.

The account was healthy with a current balance of £777.78. However, with no known sources of significant new funds to come, we should remain financially prudent. The treasurer was getting the list of cheque signatories up to date and in line with present needs as soon as possible.

Due to pressure of other commitments Tim Davies is standing down as Co-chair and there was some discussion about changing to a more conventional committee of Chairman, Secretary, Treasurer and whatever other officers might be felt necessary in future. However it was decided that the present co-chairing arrangement met the present needs well and allowed flexibility as to who did what. Sabita was happy to replace Tim as co-chair, and Mike and Elizabeth were happy to remain as the other co-chair and treasurer respectively. All were duly proposed, seconded and unanimously elected as below:

Sabita proposed a vote of thanks to Tim Davies for all he had done for the coalition over the years, and especially the last year. This was carried unanimously and enthusiastically with many expressions of hope that he would continue to come to meetings and help out when he could.

Other matters discussed were future plans and aspirations, as above, and timings, locations and nature of future coalition meetings. We look forward to more detailed discussion of all these at the next regular meeting. Sabita undertook to arrange a date for such a meeting and publicise it.

Also attending were the Minister of Communications, Amanda Davila, and Vice Minister for Social Movements, Cesar Navarro – all there to celebrate World Fair Trade Day, along with 20 delegates, including participants from the Fairtrade Labelling Organisation, the World Fair Trade Organisation ‘Economia Solidaria’ and the Rector of the Indigenous University Tupac Katari.

This was just the start of a day that involved many more participants, discussing and exploring the impact of Fair Trade in Boliva.

Vice President Alvaro Garcia Linera, came to Oxford last year and gave a talk at the Latin American Center at St Antony’s College and at the Oxford Union.

We look forward to hearing many more stories from Judith on her return to the UK.

Oxford Fair Trade Coalition’s Judith Condor-Vidal is spending this year in Bolivia. She has just sent an update on how they are celebrating World Fair Trade Day.

Bolivia initiated celebrations for World Fair Trade Day on May 10 with a workshop involving producers from around the country in the Ministry of Productive Development in La Paz. The workshop took as its title ‘Fair Trade in Bolivia: Another Economy is Possible’. It brought together 75 people from some 50 fair trade organisations.

The meeting was hosted by the vice minister responsible for domestic and foreign trade, Huascar Ajata, who told those present of the initiatives being taken by the Bolivian authorities to promote alternative forms of production and commerce.

A quick reminder that tomorrow (Friday 11th May) is the Oxford Fair Trade Coalition AGM from 4.45 at the Town Hall, followed by a Fairtrade Volunteers Celebration Event from 5 until 7, where we welcome all volunteers working for Fairtrade in Oxford to join us for refreshments, a chance to meet up and share news and conversation, and the premier of a short film recently created on a visit to Just Change producers in India. We are holding this, of course, just before World Fair Trade Day which takes place this Saturday. See http://www.wftday.com/ for videos and more information about World Fair Trade Day.

An annual report of the work of the OFTC is below. Tomorrows AGM will include the election of co-chairs. Tim Davies is standing down as co-chair. Mike McKinley will be standing again, and Sabita Banerji is standing for election as co-chair.

We look forward to seeing many of your there, and continuing to work with others over the coming year,

The year in review

Our last AGM was held in late 2010. Since the start of 2011 the Oxford Fair Trade Coalition has:

You can read more about all our activities on our website at www.oxfairtrade.org.uk. All these activities are only possible through the work of a network of committed volunteers – both a core team who regularly attend OFTC meetings, and a wider community active in working for Fairtrade across the city. We’ve also explored ways to engage new volunteers, from the photographers who took amazing photos of our contribution to the Fairtrade Foundations record breaking ‘cotton bunting’ campaign, and the developers who have been helping to create a mobile website for finding Fairtrade in Oxford (coming soon!).

The Local Government Meet the Millennium Development Goals event in Oxford provided us with a great moment to both look back at the history of Fair Trade in Oxford -from early craft product imports organised by Oxfam staff and the launch of Campaign Coffee at Uhuru on Cowley Road, to the launch of Oxford’s Fairtrade Town Status in 2004 – and to explore the present and future of Fairtrade, which in troubled economic times is ever more important to support producer groups across the world to develop sustainable livelihoods.

One of the strong themes of our work over the last year has been making connections: exploring the links between Fairtrade and other issues, such as the environment, gender, education and peace, and this is an area of work we hope to continue. We have been delighted to be able to work in partnership with groups like Just Change and Friends of Kwendo Kor in recent events also, exploring frontiers of Fairtrade, and models that go beyond the Fair Trade mark to develop radical trading relationships based on mutual benefit and co-operative structures. We hope to be able to explore the relationship of Fair Trade and co-operatives more in this, International Year of Co-operatives.

Over 2011 and 2012 the kind support of Oxford City Council, funding from the European Local Government and MDGs project, and funding from a Youth for Fairtrade Project to support to development of the mobile website, have enabled us to twice employ a consultant to work on projects, including our Fairtrade City Renewal (presented as the ‘Your Fairtrade City event and day of action’), and on Fairtrade Fortnight 2012.

“Congratulations on maintaining Fairtrade City status for Oxford and for the great work you have achieved over the past few years. It has been inspiring to hear about all the progress that has been made since 2009. Once again we would like to thank everyone that has been involved in ensuring that the Oxford Fairtrade campaign continues to go from strength to strength. As you are aware it is because of campaigns such as this that Fairtrade continues to grow and now brings benefits to more than 7 million people – producers and their families – in over 50 countries”
Fairtrade Foundation comments on our 2011/12 renewal of Fairtrade Status

The core coalition group has continued to meet regularly at the Town Hall, with representatives from local Fairtade businesses, campaigners, the City Council and other supporters. Minutes from all our meetings are available through the website www.oxfairtrade.org.uk.

Although we no longer operate a formal membership structure over 40 people are on the mailing list to hear about upcoming meetings, and are, as such, coalition members. If you do not get invites to our regular meetings and would like to, please let us know via fairtrade.

During 2011/12 OFTC has been co-chaired by Tim Davies and Mike McKinley, and Elizabeth Whitwick has been treasurer. Sabita Banerji has worked as a consultant for OFTC organising our status renewal, and Fairtrade Fortnight 2012. Sebastian Johnson and Val Johnson have been our links with Oxford City Council.

Looking to the future: Challenges and opportunities

Alongside our successes, we also need to engage with a range of challenges, both for OFTC, and for fair trade more widely. Members of the coalition have also submitted suggestions for future developments when registering for our 2012 AGM, and some of these are also included below.

We hope you will join us in working on many of these opportunities and challenges, whether as a regular member of our meetings or just keeping in touch with your news and updates via fairtrade.

We end this annual report by re-iterating our thanks to everyone who has been involved in sustaining Oxford’s role as a leading Fairtrade City. Ultimately though, OFTC is not about Oxford, but is about having a global impact: ensuring that trade supports poverty reduction, sustainable livelihoods, education, and healthy communities for producers. Although products with the Fairtrade mark have become mainstream in the eight years since Oxford became a Fairtrade City, so much trade remains unfair and exploitative. Fair trade remains a radical idea: showing that an alternative is possible, and it’s an alternative want to continue shouting about and building up. 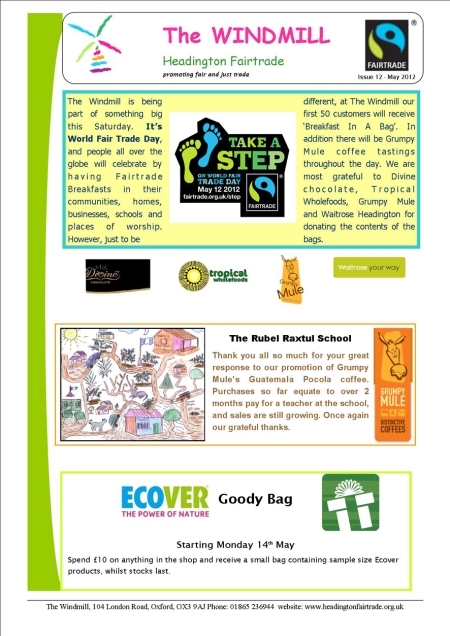