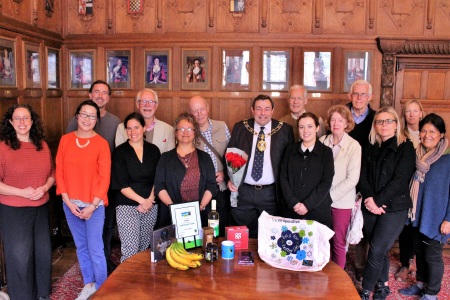 Yesterday, September the 25th, was the 3rd anniversary of the launch of the Sustainable Development Goals – the ambitious but achievable UN roadmap for a fairer, healthier, safer world.

It was also the day of the global launch of International Fair Trade Charter. Initiated by Fairtrade International and the World Fair Trade Organisation, it sets down the fundamental values of Fair Trade and defines a common vision towards achieving the Sustainable Development Goals (SDGs). A vision that, we believe, cannot be attained through business as usual.

And it was the day that, on behalf of Oxford Fair Trade Coalition and the Fairtrade Foundation, I was proud to present the Lord Mayor of Oxford with the certificate of renewal for Oxford’s status as a Fairtrade City.

It was a fitting recognition of the commitment of the many Oxford businesses, organisations and individuals who are working for and promoting fair trading between producers all over the world and the people of Oxford.

Oxford has been one of the cradles of the fair trade movement – the first Oxfam shop, the precursor of all fair trade shops, selling crafts made by Chinese refugees, is here in Oxford.

The World Fair Trade Organisation began life as part of Oxfam here in Oxford and its CEO, Erinch Sahan is coming to Oxford to speak at our AGM on December 10th – International Human Rights Day (put it in your diaries!).

Importantly, we have several dedicated fair trade shops here in Oxford, including Fairtrade at St Michael’s – that celebrates its 15th anniversary this year – Exclusive Roots in St Giles, Indigo in Cowley Road and Headington Fairtrade… that was graced with a visit by Archbishop Desmond Tutu.

And,  of course, Oxford City Council has continued to play its important part in keeping the city Fairtrade – its procurement policy now requires suppliers to provide Fairtrade alternatives where possible.

As the Lord Mayor said, Oxford is “a city of influencers” – let’s use that influence to create a global trading system populated by supply chains and models of business that leave no one behind.

Oxford Fair Trade Coalition will continue to draw on our city’s deep roots in fair trade, its history of thought leadership and its global reach through its thousands of students and visitors every year –  to support the fair trade movement and the Sustainable Development Goals.  Please do join us in doing so.

This entry was posted on Wednesday, September 26th, 2018 at 10:35 pm and is filed under Uncategorized. You can follow any responses to this entry through the RSS 2.0 feed. You can leave a response, or trackback from your own site.